Raising the Roof and other stories

We are delighted to report the successful completion of our Roof Appeal, which was launched at the end of January 2015 and officially declared closed on 31 December 2020. The total received up to 30 June 2021, including gift aid and interest, was £277,426.

In his 2014 Quinquennial Report, our architect had listed as urgent the repair of the slate roofs and lead gutters of our Church, which is listed Grade II* and was completed in 1857. The work was done in phases: the Tower parapet gutter in 2016, the South Aisle in 2017, the Nave in 2019 and the North Aisle, Chancel & Vestries in 2021/22. We are grateful to our Architects, Quentin Alder and John Malaiperuman, and our contractors, Mogford Prescott Limited, for their hard work and help in achieving this result.

In addition to the repairs, insulation has been added to improve the heating of the interior, and the completion of the work has given us a watertight and better insulated building. the defects identified in the 2014 Quinquennial Report have been remedied and this and will enable us to reorder the interior of the Church for the benefit of our congregation and the local community.

We expect therefore that the net cost, excluding VAT, will be £271,241. leaving a surplus of £6,186. This, and any donations received after 31 December 2020, will be added to the Fabric Fund for major repairs and improvements to the Church. 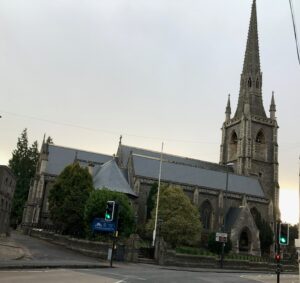 Above all we are grateful to the many members of our congregation and local residents who have supported the Appeal with donations and by organising and/or participating in fundraising events.  We received £96,000 from individuals and £27,900 in bequests and legacies. Our Sponsor-a-Slate Appeal raised £16,000 and other fundraising £30,400. 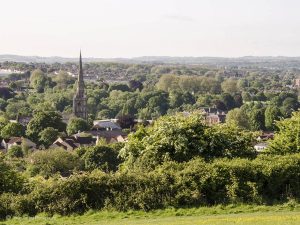 At first the Church was the responsibility of the Benedictine monks of the Priory of St. James, who appointed chaplains. The first Vicar was instituted in 1540, after the dissolution of the monasteries. In 1544 St. James’ Priory with all its assets, including the rectory and tithes of St. Giles’ Church, was sold to Henry Brayne, a merchant tailor of London. In 1626 the Heath House estate, with the rectory and tithes, was bought by Thomas Walter, from whom they descended to the Smyth family of Ashton Court, as described in the tablet over the North Door. The lay rectory and tithes were surrendered by Greville Smyth in 1857, when the Vicar became the Rector, but the right of presentation to the benefice was retained by the family until 1948, when it was transferred to the Bishop of Bristol.

The foundation of Holy Trinity