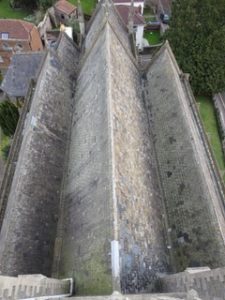 In his 2014 Quinquennial Report, our architect listed as urgent the repair of the slate roofs and lead gutters of our Church, which is listed Grade II* and was completed in 1857. We launched the Appeal in January 2015 and the amount raised up to July 2019 enabled us to carry out in phases repairs to the Tower parapet gutter and the roofs of the South Aisle and Nave. In addition to the repairs, insulation has been added to improve the heating of the interior, the benefits of which have already been appreciated. The completion of the work will give us a watertight and better insulated building, remedy the defects identified in the 2014 Quinquennial Report and enable us to reorder the interior of the Church for the benefit of our congregation and the local community.

Generous responses to our final appeal to raise £10,000 to make up the £127,000 required for the final phases of the roof repairs (the North Aisle, Chancel, Vestries and North Porch) have enabled us to place the contract with Mogford Prescott Limited, and the work is now in hand, with completion due at the end of February 2021. The Appeal will be officially closed on 31 December 2020; any money received after that date and anything remaining in the Appeal Fund after the work has been paid for will be added to the Fabric Fund for major repairs and improvements to the Church.

Having completed the work to the Nave roof in July 2019, we decided early in 2020 to aim to complete the rest of the work by the end of that year, if possible, partly to wind up the Appeal after six years and partly because it seemed unlikely that the Listed Places of Worship Scheme would continue after 31 March 2021. This was a considerable challenge, especially because the consequences of COVID-19 have cut down our usual fund-raising activities, except Sponsor-a-Slate and Ride+Stride, and we would not have been able to reduce what was needed to £10,000 without the generous help of Allchurches Trust, Bristol Archdeaconry Charity, Gloucester Historic Churches Trust, National Churches Trust, Temple Ecclesiastical Charity and the Wolfson Foundation (ChurchCare).

Since we launched our Roof Appeal in January 2015 we have raised a total of £274,000 and have spent £149,437 (excluding VAT which has been recovered under the Listed Places of Worship Scheme) on the repairs to the Tower parapet and the roofs of the South Aisle and Nave. We will make a full report after the present work has been completed. Meanwhile, we thank everyone whose efforts and generosity have enabled us to achieve this result, and also the contractors, Mogford Prescott Limited, and our architects Quentin Alder and John Malaiperuman.

This website uses cookies to improve your experience while you navigate through the website. Out of these, the cookies that are categorized as necessary are stored on your browser as they are essential for the working of basic functionalities of the website. We also use third-party cookies that help us analyze and understand how you use this website. These cookies will be stored in your browser only with your consent. You also have the option to opt-out of these cookies. But opting out of some of these cookies may affect your browsing experience.
Necessary Always Enabled

Any cookies that may not be particularly necessary for the website to function and is used specifically to collect user personal data via analytics, ads, other embedded contents are termed as non-necessary cookies. It is mandatory to procure user consent prior to running these cookies on your website.